You are here: Home / Tips / Google To Downrank Pages With Intrusive Interstitials 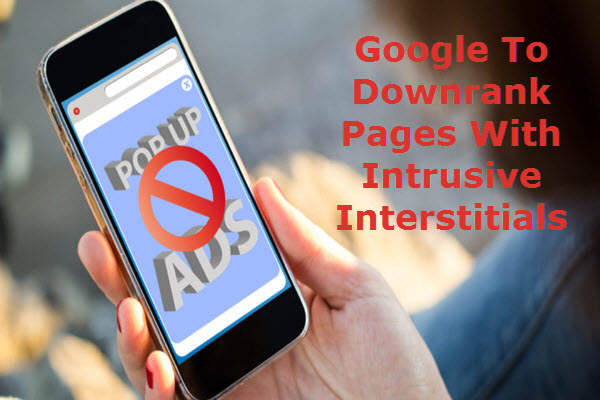 Google has clearly stated that not all the Interstitials display ads would rank low. There are some valuable intrusive interstitials that alert the reader about

Since the usage of Mobile-friendly websites has increased to a considerable level, Google has taken an initiative to control the “intrusive” interstitial display ads that block the user’s way to access any particular service on the mobile.

Google keep posting blogs on a regular basis informing the readers about its latest upcoming. As of now, January 10, 2017, has been fixed to take strict actions against the users who post interstitials ads that pop up in the middle and disrupts the viewers’ mood. Interstitials ads pop up and block the users’ view of the mobile screen; this had led Google to downrank pages that contain such frustrating factor.

Not all the Interstitials ads are down-ranked, there are some exceptions that Google consider and accept while ranking on a higher scale:

Google has become smart these days and if anyone tries to forge Interstitials display ads by mentioning the same content as that of an ad in the inline pages, then he or she is likely to face the same punishment.

Google has specifically stated that this step is one of the hundred steps to checking any website ranking. Google is a powerful search engine and hence it uses multiple options to categorize your web content in order to give the ranking. Segregating ranks based on Intrusive Interstitials is one of the finest steps towards refining websites and ranking them amongst the top-rankers.

This step is a positive move taken by Google to deliver better search results without any hassle.

Sathishkumar Varatharajan is a blogger, internet marketer and a business consultant. He has launched Bangalore SEO Company in the summer of 2013 in an effort to spread the awareness of the importance of getting local businesses online and provide cost effective SEO services for them! You can connect with him @sathishkumaratr.

Subscribe with us to get useful and informative search engine optimization (SEO) tips daily for free!